FROM CALATRAVA TO CURTIUS:  discover the culture

A tailor-made tour named after two outstanding architectural emblems of our city, one of which bears witness to a rich industrial past, the other is a symbol of contemporary renewal and a promising future. In the middle, it is a city full of contrasts that reveals itself between tradition and modernity and that I invite you to discover at the rhythm of your steps.

day 1 : from de station to the historical heart

The visit to Liège certainly begins with its emblematic railway station, the Calatrava station. Inaugurated in 2009, it is one of the most beautiful gateways to the city. Its impressive architecture is the work of one of the greatest architects of our time, the Spanish architect Santiago Calatrava. Its visit is essential.

In front of the station stands the very modern finance tower, the Paradise Tower, inaugurated in 2015 and which becomes one of the city's most important landmarks, visible from everywhere. In this booming district, many renovation projects have been carried out in just a few years, leading to a renewal that makes the city an attractive metropolis. The project is ambitious because it is part of a development of great economic and tourist interest. A whole new district is taking shape with shops, offices and important cultural points.

Also to see on rue Dartois, 2 beautiful Art Nouveau style houses, built one in 1907 and the other in 1922 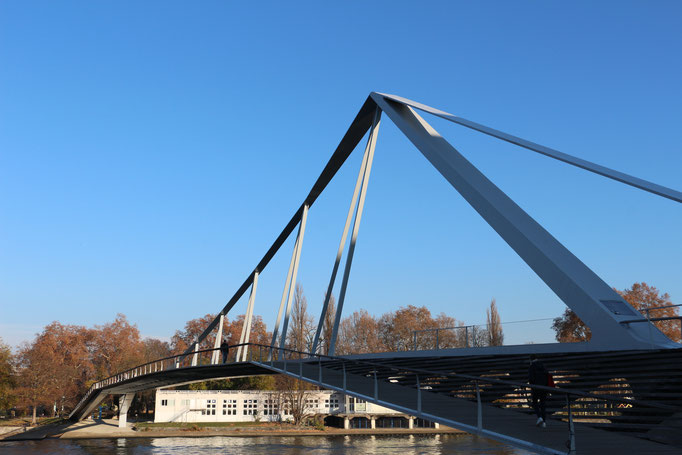 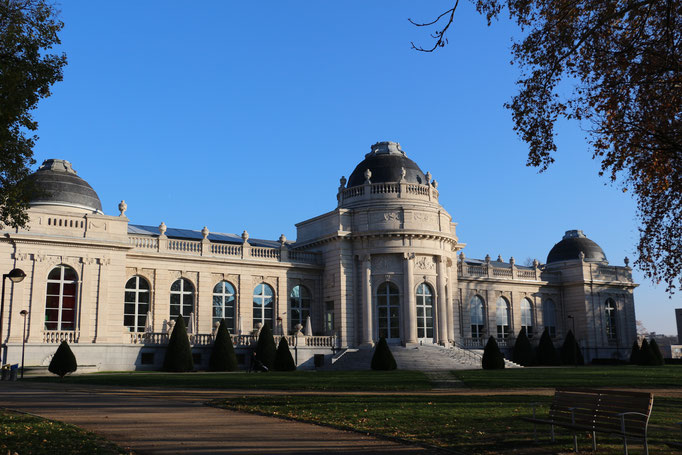 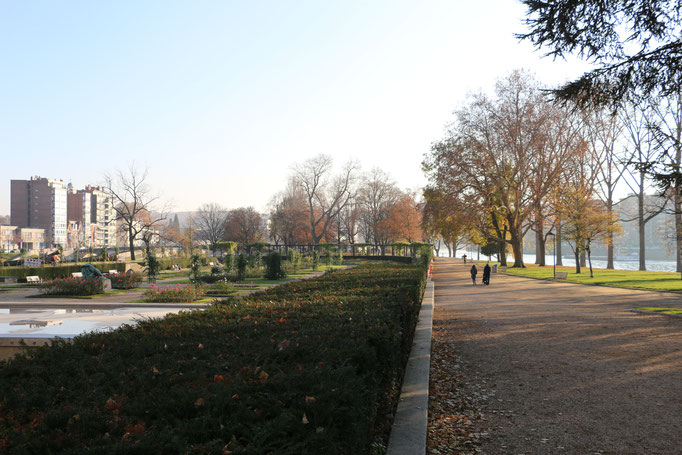 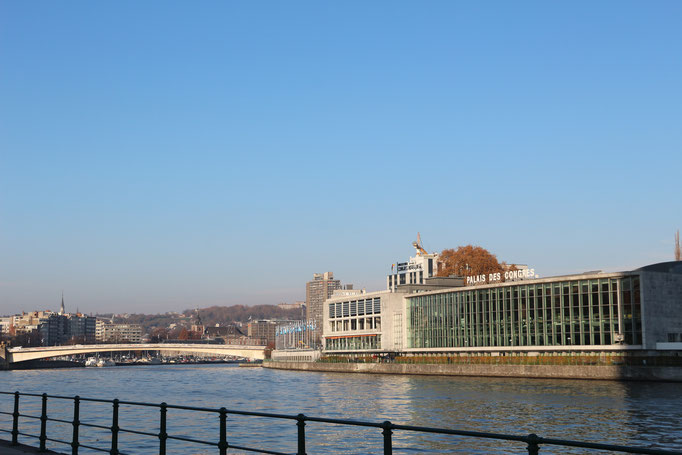 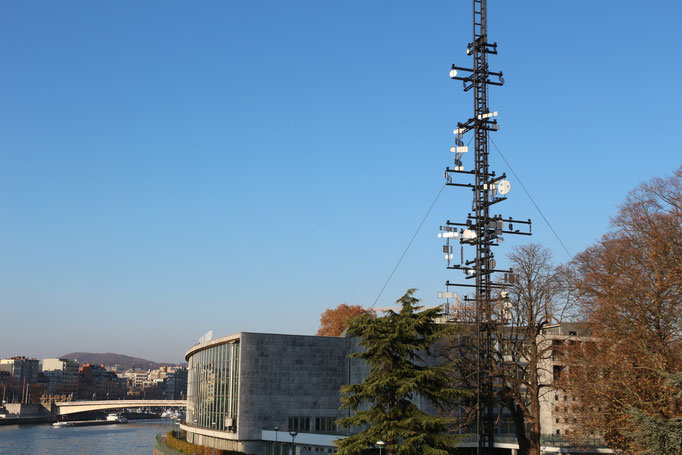 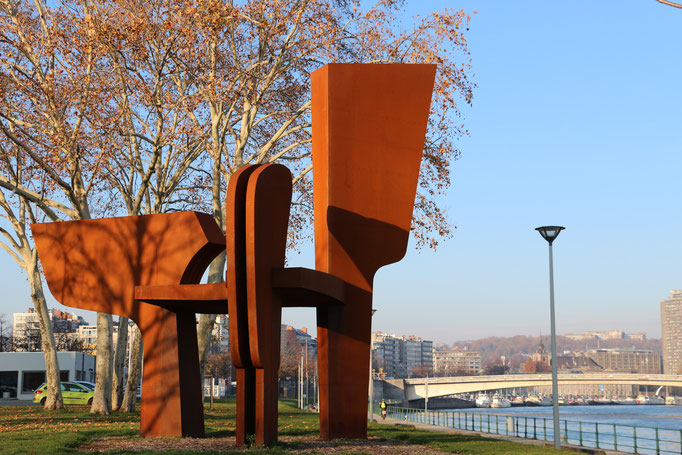 As soon as you leave the station you go in the direction of the "Paradise Tower" and you arrive on the river Meuse. The docks have been transformed into a pleasant place to walk. The "Belle Liégeoise" footbridge, inaugurated in 2016, becomes a complementary point of interest linking the station district to the Boverie Park district. This is where the "Boverie Museum" is located, a museum of modern and contemporary art inaugurated in 2016.

Take a break to enjoy the beautiful rose garden, the many sculptures and the imposing architecture of the museum. It is also where the impressive "Cybernetic Tower" of the artist Nicolas Schöffer stands, one of my favorites. Don't miss it. With an electronic system, it produces sounds and lights. The walk continues along the Meuse River along the "Palais des Congrès".

Cross the next bridge and you arrive at "Les Terrasses", a magnificent garden surrounded by superb 19th century houses, many of which have unfortunately been destroyed. The square is still a charming and very popular place with a view of the small marina and high real estate value. 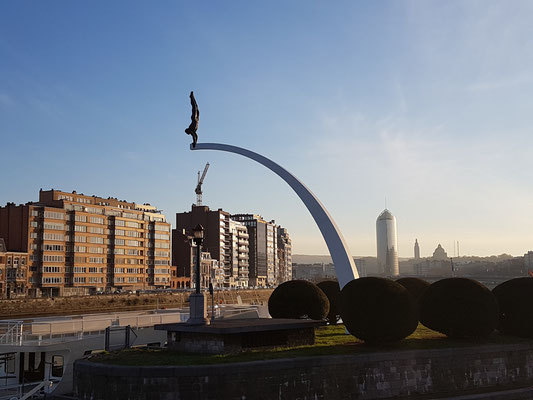 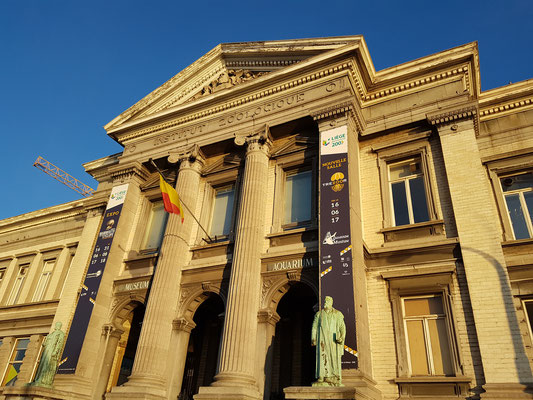 Opposite the conservatory you take a small street that will lead you to the majestic church of "Saint Jacques le Mineur", a former Benedictine abbey church of Saint Jacques in Liège, founded in 1015 and whose current Gothic church was completed in the 16th century. The visit is essential. 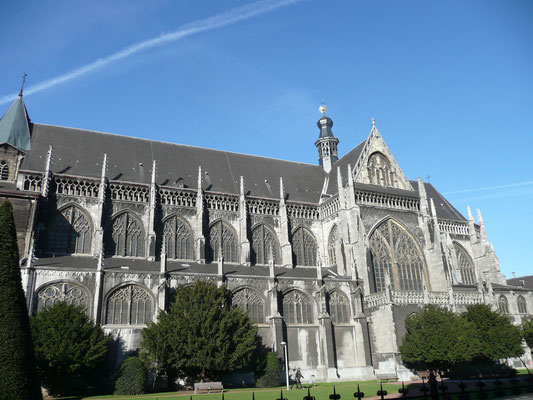 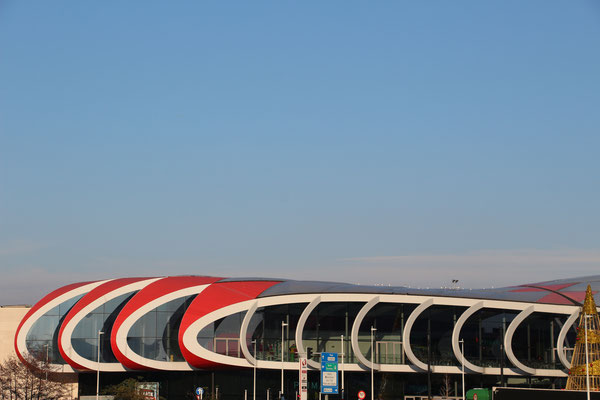 Cross boulevard Emile Destenay and explore the heart of Liège by a small street, rue Saint Remy. Full of charm, it hides a small treasure of architecture. In the middle of the street, on your left, take a passage that leads to a beautiful little courtyard where the houses look like doll's houses. A haven of peace in the heart of the city, close to the cathedral, which you can reach in 2 minutes. The Cathedral Square is the nerve centre of the city, with on one side is a pleasant pedestrian shopping area and on the other side, behind the cathedral, is a kind of "Latin Quarter" with Parisian atmosphere that hides gastronomic and tasteful treasures not to be missed.

In the pedestrian centre of Liège, you will discover not only a variety of trendy shops but also bars and restaurants. Don't miss the Lemonnier passage, one of the oldest covered commercial passages in Belgium, with prestigious boutiques that have been located in Liege for decades. The "Carré" district is famous for its bars and festive atmosphere during the weekend. The "rue du Mouton Blanc", the "rue du Pot d'or" and the "rue de la Casquette" are full of personalized shops where the welcome is a mirror of the well-known Liege hospitality.

On the edge of this district is the "Royal Opera of Wallonia". Its geographical location, at the crossroads between Germany, the Netherlands, the Grand Duchy of Luxembourg and France, and its high quality shows attract a large Belgian and international audience.

This is where your first day in Liege ends. It's time to relax in one of the bars offering a variety of special beers and enjoy one of the many food specialities in our city. Tomorrow it is the historical heart that awaits you in a more typical atmosphere in the heart of Liège culture.

day 2 : FROM the historical heart to Outremeuse

The historical heart of Liege: from Place Saint Lambert to Place du Marché

Welcome to the historic heart of Liège and to 'Place Saint Lambert', a popular square that links the shopping center and the historical center.  The "Palace of the Prince Bishops", now the Palace of Justice, and the former "Innovation Building" are the only historical witnesses that have resisted the many transformations of the square during the 20th century.

Enjoy the authentic atmosphere of Liège through the "Place du Marché", a charming little square that looks festive as soon as the sun comes out. Many terraces surround the two symbols of the city, the Perron and the town hall. It is the ideal place to enjoy a good beer.

Opposite Le Perron, follow "En Neuvice", a pedestrian street that has become one of the most appreciated places for artists and gourmands. You can find good chocolate and quality tea as well as charming craftsmen's shops. It is now time to get lost in the surrounding streets. You will come across "Beer's Lovers", the Belgian beer temple, or the "House of the Peket" and its famous Liege-style "cannonballs", or a travel bookshop, "Toutes Directions", which will provide you with the best addresses in the city.

But the must-see is located rue des Mineurs at "Une gaufrette saperlipopette", a cave of alibaba sweets from here and elsewhere that will take you back to childhood. It is there that you will fill up with Liège waffles, Liège bouquettes, financiers, pancakes, chouquettes, and so many others. Everything is a real delicacy. 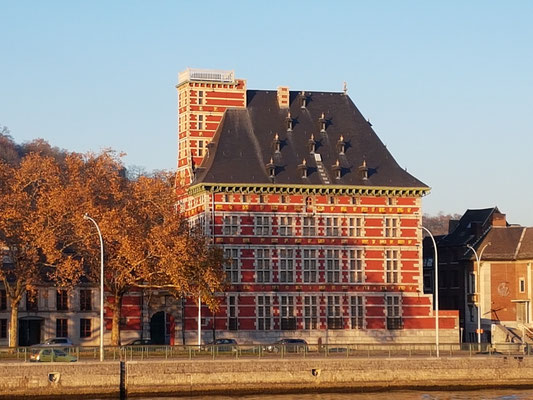 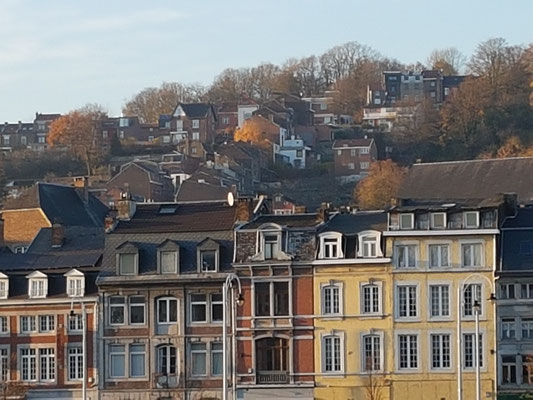 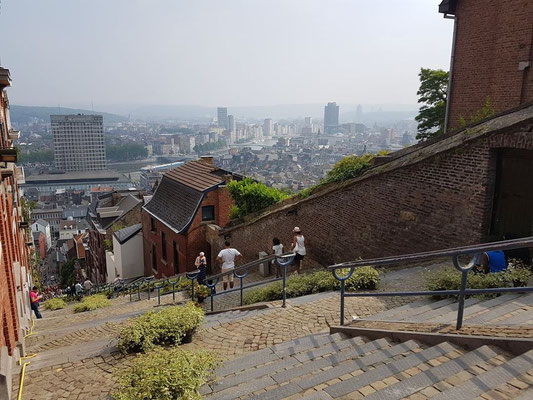 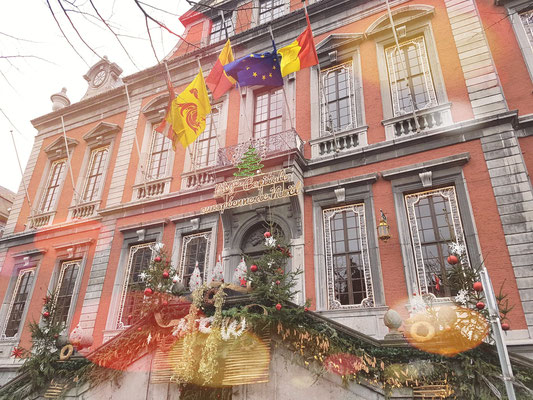 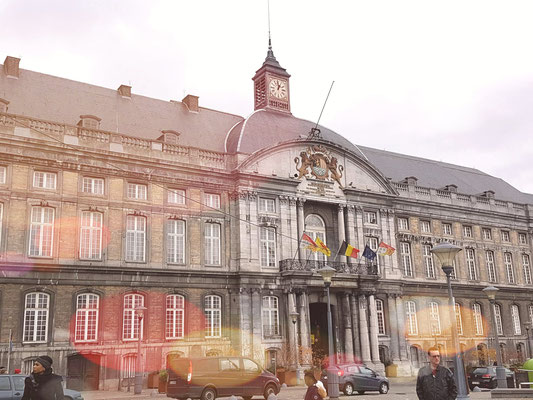 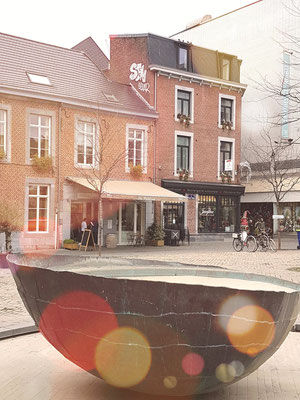 Go on to "Hors Château" Street, the main historical road in the area. This street concentrates a large number of important points of interest in the city. There are buildings dating from the Middle Ages as well as private mansions from the 18th century.

The main tourist attraction will always be the famous "Montagne de Bueren", a street made only of stairs and which climbs the hill to reach the old citadel of which only the fortifications are left. For those who have the courage to climb it, the view of the city is beautiful.

After enjoying the view, you can take the ramparts path that will take you across the hill to the end of rue "Hors Château". To make sure you don't miss out on anything in the neighbourhood, take rue Hors Château in the other direction and visit the secular impasses that will take you to the intimate heart of the neighbourhood. We feel a little curious  but the inhabitants are welcoming and proud to share their heritage.

In one of these impasses is the famous restaurant "Le Thème", an original gastronomic address that changes its setting according to its menu. The district does not lack quality restaurants such as Le bistron'home, which has been awarded a gourmet bib. 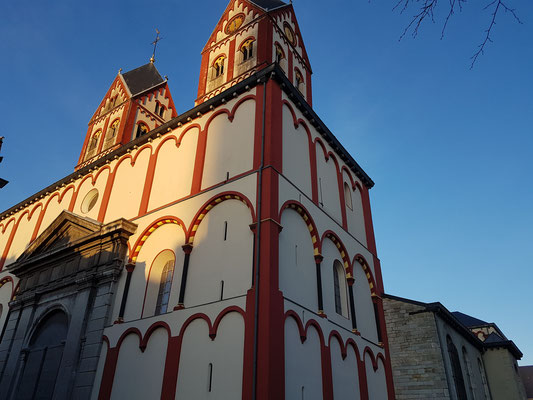 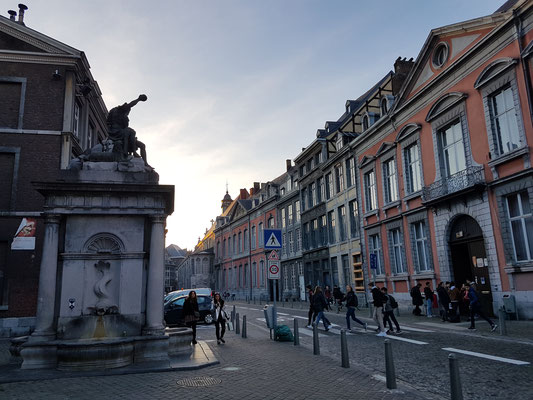 Here you will leave rue "Hors Château" to join  "En Féronstrée", which will take you to "Place Saint Barthélemy" and its magnificent church where the famous baptismal font, one of the jewels of Mosan religious art, is located. It is also on this square that you will find the Curtius Museum. This is a major cultural site in Liège.

Go back and walk past the "Ansembourg Museum", an 18th century mansion house, then "rue de la boucherie" in front of the old meat market hall, a very beautiful Renaissance building, now the tourist office, which will help you to fill up with good ideas. In this district you will find a special atmosphere that already announces the famous "Batte market" which takes place every Sunday morning along the Meuse River a few steps from there. From the old bistro on "rue de la Goffe" to the vintage boutiques on "rue Souverain Pont", lovers of the good find will be delighted. We can mention for example the Bistrot d'en Face, at Nathalie's, the Paris Brest and of course at Lequet.

Here let yourselves be carried away by the relaxed mood of the neighborhood. The "rue Souverain pont" has become a window on the know-how of young talents from Liège. Fashion or jewellery designers share the street with organic and trendy gourmet places. Creativity goes hand in hand with diversity, and nature with branchitude, or even "wattitude" as the name of a magnificent boutique that offers a vast choice of pure Walloon products.

All you have to do now is cross the nearest bridge to complete your Liège immersion. Welcome to "Outremeuse", the most authentic, the most popular, the one that smells of Liege conviviality. It is not for nothing that it is here that the celebrations of August 15th are celebrated in the purest folklore of Liège. These celebrations are organized several months in advance. Here the inhabitants claim to belong to a true independent republic. "We don't live in Liège, we live in Outremeuse!" "Rue Roture" is the symbol of this, with its small old houses that have become, over time, welcoming restaurants. Tchantchès, their mascot, is never far away and will always have enough to satisfy your thirst.

You know what you have to do now. A good table in a warm bistro to end the day will leave you with fond memories of Liege.